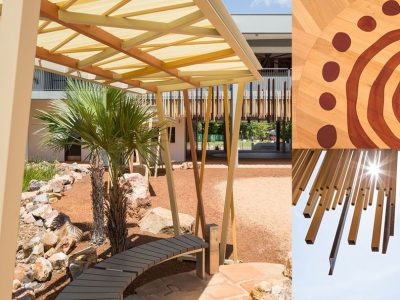 The Northern Territory Architecture Awards were recently held in Darwin, and Hodgkison are proud to have been awarded the Yali-McNamara Award for the Charles Darwin University – ACIKE Ceremonial Space.

“While this augmentation of an existing space is both minimal and low cost, the effect is excellence of skillful originality” – The Jury.

This inspiring project involved the design of a series of modifications to the existing Australian Centre for Indigenous Knowledge & Education (ACIKE) ceremony area on the Charles Darwin University Darwin campus.

The project consists of a new ceremonial space, seating and woven shading structures which dramatically improve the usability and experience of this important cultural meeting place. Individual elements take inspiration from the surrounding cultural, natural and built environments. The careful use of colour, material and built form was significant to create harmony with and enhance the comfort of the ceremony space, providing a culturally relevant and vibrant space for the community.

Congratulations to CDU ACIKE, the Hodgkison team and to our project delivery partners Asbuild NT, WGA Engineers, RLB and Tecon.

Our project will now proceed to the National Architecture Awards, which will be announced on Thursday 1 November in Melbourne.

Want to join the discussion?
Feel free to contribute!